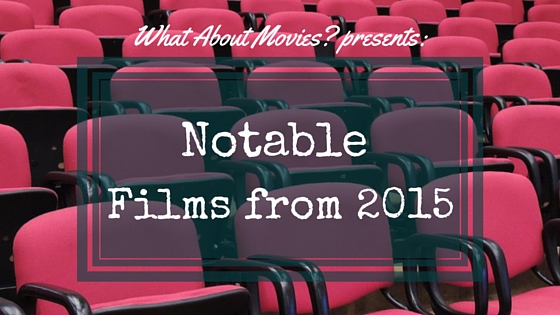 Top Ten lists are always going to be an exercise in futility. With a film industry that produces hundreds if not thousands of films each year, creating a definitive top ten of the year’s best is the textbook definition of a Sisyphean task. However, this here is our antidote to such a futile exercise as I now list all of the notable releases from 2015 that our previous post may have missed. However, before I begin, a caveat: This list will be entirely composed by films that I think were notable releases from last year as I have not asked the opinions of my partners-in-crime so consider this the opinion of one wayward cinephile whose opinions may be a tad bit unreliable. Also, this list will not include the films that were a part of our Top Ten list. With all that said, dig in.

A Most Violent Year (Directed and written by JC Chandor)

Technically a movie from 2014 since it was released for public consumption on the 31st of December 2014 but I saw this film in a cinema when 2015 was already well underway. This film was the beginning of Oscar Isaac’s banner year, a year that saw the release of Ex Machina (a WAM Top Ten Movie of 2015), the critically acclaimed HBO miniseries Show Me A Hero, and the franchise giant Star Wars: The Force Awakens. When Oscar Isaac can say that a crime film about a man’s struggle to maintain his moral compass despite the violence of the world around him is his weakest work of the year, a film that cements him as one of the most interesting actors alive, then you could say that Isaac is having a very good year.

A documentary about the life of musician-recluse Seymour Bernstein directed by the keen eye of Ethan Hawke. The whole documentary is basically a profile of the musician as he talks about his humble beginnings, his reasons for retiring from the music scene, and his current life as a teacher. A favorite moment of mine from the film is his recollection of hearing a piece by Schubert on his record player for the first time and how his mother found him in tears because of the music. Hearing Bernstein wax poetic about life, art, fame among other things is one of the best cinematic experiences that I have had in my life.

Of course a documentary about one of my favorite authors of all-time would come as no surprise to anybody who knows me personally. I saw this film at the Latin American Film Festival here in Washington DC. In fact, it is the only film that I saw from that festival. It is a documentary profile of Gabriel Garcia Marquez, perhaps Latin America’s greatest author. There is nothing groundbreaking about Justin Webster’s documentary nor is there anything technically impressive with the film. But the way Webster presented Gabriel Garcia Marquez thru an investigation of his life from his birth up until his death and thru interviews with the people who knew him along with those who were inspired by his work makes this one of the best documentaries about a writer ever made.

Released around Christmas of 2015, this documentary about the seminal interviews that happened between the interviewer, Francois Truffaut, and his subject, Alfred Hitchcock, is Kent Jones’ gift to cinephiles everywhere. The interviews were made at the time of Truffaut’s emergence as one of the prime figures of the French New Wave and during Hitchcock’s prime, it is notable for not only being the source material of arguably the best book about cinema but also for bringing recognition to Hitchcock as an auteur of the highest caliber.

Am I the only one who thinks that it is criminal that Grandma is Lily Tomlin’s first leading role since 1988? That means that there is a span of 27 years in which Lily Tomlin’s talents as an actress where not in full view. Hollywood should weep then now that they’ve been shown by Tomlin and her director, Paul Wietz, what they have been missing with what is now being touted as Tomlin’s best performance yet as an old lesbian poetess trying to help her granddaughter have an abortion. It is a bravura of a performance by Tomlin, a performance that should net her accolades if the world is just.

The End of the Tour (Directed by James Ponsoldt; Written by Donald Marguiles)

The worst biopics are those that hinge on the unoriginal narrative device of telling the life of its subject across decades, the proverbial birth-death if you will. While some of the best biopics in recent memory (the powerful Selma, the wholly original I’m Not There, the Philip Seymour Hoffman showcase Capote) are those that either chose to concentrate on one event (Selma March, the creation of In Cold Blood) or tell the story through an inventive narrative device (Bob Dylan as seven different personas). Which makes The End of the Tour, a film about Sam Lipsky’s interview of David Foster Wallace while the latter was on a book tour, on the “some of the best biopics in recent memory” spectrum. Hinged on the two amazing performances of Jesse Eisenberg (Lipsky) and Jason Segel (David Foster Wallace), The End of the Tour is a joy to watch.

Best of Enemies (Directed by Morgan Neville and Robert Gordon)

There is something fascinating if not entertaining about watching pundits who have different political views have a go at each other. In America, the mecca of political punditry, you can see this in full display every night as political pundits all across exchange words that are mostly unpleasant. In Best of Enemies, Neville and Gordon shines a light on the birth of pundit politics: the 1968 Presidential Conventions Debate between Gore Vidal and William F. Buckley Jr. It is a very interesting documentary if only for the fact that it frames Buckley and Vidal’s life (their work, frustrations, motivations, philosophies) around the debates that would inevitably change the landscape of the American media.

Cinematic adaptations of the Bard’s oeuvre tend to be difficult to pull off because their sheer number tends to ensure that only the very best will get noticed. Many directors from Laurence Olivier to Joss Whedon have attempted to adapt Shakespeare and with varying results that it seemed Justin Kurzel’s Macbeth would just be another in the long line of undistinguished adaptations of Shakespeare. Kurzel proved doubters wrong when he created one of the most moving adaptations of Shakespeare that I have seen. Combining gorgeous cinematography, an evocative score, the nuanced performance of its two leads with an almost Malickian flair for monologues, Justin Kurzel’s Macbeth cements itself as one of the more brilliant Shakespeare adaptations out there.

Heart of a Dog (Directed by Laura Anderson)

It is no understatement when I say that Anderson’s Heart of a Dog has haunted me for days after watching it. The documentary, more experimental than not, tells the story between Anderson and her beloved dog while ruminating about life, death, loss and love along the way. Uncompromising and abstract with graceful filmmaking, Heart of a Dog is perhaps the best documentary to come out this 2015.

Beasts of No Nation (Directed and written by Cary Joji Fukunaga)

Cary Joji Fukunaga showcases his mastery of not only the craft of directing but also the craft of film making in general with his third film, Beasts of No Nation. Not only did he direct the film, he also wrote the film’s screenplay and did its cinematography. The result is a visceral viewing experience that proves Fukunaga’s talents in all aspects of making films that are not only socially relevant but also visually striking.

Narratives about the immigrant experience tends to be dour and cynical affairs filled with death, persecution, and loneliness. However, in Brooklyn, the whole narrative tends to be uplifting and sweet yet still presents the whole experience as poignant and nuanced. What prevents this film from being a pile of mushy sentimentality is the skilled direction of John Crowley and the subtle performance of Saoirse Ronan which results in a film that would leave a smile on your face as you exit the cinema.

Another biopic that shies away from the clichéd narrative device that presents the life of a distinguished person from birth to death, Steve Jobs focuses instead on three product launches held by Jobs (The Macintosh, NeXT Computer and The iMac G3). Despite the films marquee director, this is more of Aaron Sorkin’s film than Danny Boyle’s with the dialogue and the narrative flow consistent with a Sorkin script yet Boyle still manages to make the whole film kinetic and alive. The collaboration between director and writer, not to mention amazing acting performances from the leads, results in a film that is sleek and innovative.

Movies about the 2008 Financial Crisis tend to be grim, severe affairs which is why The Big Short is such a refreshing change of pace from the usual because of it’s funny, stylish, and postmodern execution. However, I am not saying that The Big Short is a comedy that understates the impact of the crisis. In fact, by providing humor, The Big Short becomes a satirical indictment of the whole system that led to the crisis. It is a film that is relevant. important and, with the brilliant performance of its director and its actors, a reminder of what we lose if human greed remains unfettered.

The Hateful Eight (Directed and written by Quentin Tarantino)

The very best moments in a Quentin Tarantino film is in the long, drawn-out conversations filled with tension and menace. If you ask me what are my favorite parts of Inglourious Basterds, Pulp Fiction, and Django Unchained I would respond with: (1) the underground bar scene; (2) the apartment scene with Jules, Vincent, Brett, and Brett’s companions; and (3) the dinner scene at the plantation. There is something about Tarantino’s dialogues and their cadence that captures the viewers and such skill is in full display in The Hateful Eight, a movie where most of the things that happen on-screen are the long, drawn-out conversations filled with tension and menace.