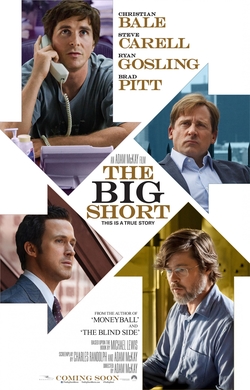 “The Big Short teaser poster” by comingsoon.net (WP:NFCC#4). Licensed under Fair use via Wikipedia.

So here you have a movie that talks about collateralized debt obligations, credit default swaps, the housing market and mortgage-backed securities. If you feel a headache coming on, I hear you. The onslaught of financial jargon can be quite a handful to take in at one go. But with The Big Short, Adam Mckay makes sure to walk us through it in the most clever and entertaining way possible. Enter Margot Robbie in a bubble bath explaining subprime mortgages. And to go with it is a big ensemble cast of superstars:  Brad Pitt, Christian Bale, Ryan Gosling and Steve Carell. But these guys don’t operate as a team ala Ocean’s Eleven. They are scattered in three different stories. But they do share one thing, the knowledge that the U.S. Economy is about to go down the drain. And yes, they all want in on the action. By shorting the housing market before it collapses, they can earn big bucks. But ironically, these characters are never portrayed as ruthless sharks, instead you see them exhibiting a conscience for the most part. Well maybe except for Ryan Gosling’s character, who is perhaps the most abrasive of the bunch, but he admits it and he owns it. But then again, his character is perhaps the most caricature-y of the group. But in a way, they all seem quite earnest which is such a brilliant thing to achieve in a movie of this sort.

The Big Short is also such vibrant film and it moves at shutter speed. The style is quite unconventional. Inserted throughout the story are montages, and you feel like you’re clicking some sort of loopy viewmaster with moving stills of random music videos, commercials and other pop culture commodities. There’s the voice-over narration and the occasional breaking of the fourth wall, and the celebrity cameos. The camerawork can be very frenetic too. The whole film is just this big ball of hyperactive and chaotic atmosphere. And its all very exciting and riveting and very funny.

But not everything about this movie  is fun and games, nor is it a mental exercise in Finance all the time. And while I sure as hell didn’t understand what everyone was saying half the time, here’s what I do get. The economic meltdown back in 2008 was an outrage, an absurd outrage. And the film made sure to convey that. The feeling of anger courses throughout the movie. The finance sector could very well be built on shit, and when it collapses who gets buried underneath? And this is where The Big Short hits it home. It made sure to underscore the fact that what happened was terrible. Millions of people lost their jobs and their homes, and none of the stupid crooks in the banking sector went to jail. Okay maybe one of them did. But one among the thousands of schmucks isn’t something to feel good about.

I never quite expected The Big Short to come out of Adam Mckay, the guy who brought us Anchorman, Talladega Nights, Step Brothers and The Other Guys. The Big Short has garnered five nominations from the Oscars and I think every single one is well deserved. This proves that comedy can be dead serious.