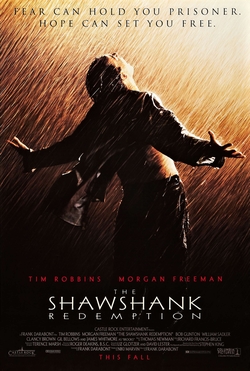 Occupying the number one spot of IMDB’s top rated movies, is Frank Darabont’s The Shawshank Redemption with 9.2 stars. And while the appeal of this movie is not lost on me, I do feel too high a praise is being given to this particular piece of cinematic work. There I said it. Calling The Shawshank Redemption overrated is suicide, I know. But to the bazillion IMDB users who put this on the number one spot, let me explain. And don’t murder me in my sleep, okay?

The Shawshank Redemption is not a bad movie. But is it the greatest movie ever made? No. Okay let’s do good news first. The good news is that the cinematography is stunning. Not surprising since the director of photography happens to be The Roger Deakins, best known for his work on the films of the Coen Brothers. And his dozen and one Oscar nominations with zero wins, preposterous I know. Now when you watch The Shawshank Redemption, you can tell that you are looking at a master class in cinematography. The sombre, gloomy atmosphere, with all the greys and browns of prison, is noticeable. But then you get swathes of orange that sort of punctures the dreariness of prison life. It’s almost as if there is, *gasp*, “hope”.

Hope is a good thing, maybe the best of things, and no good thing ever dies.
-Andy Dufresne.

You can see how Deakins cinematography is more than just pretty images. It supports and even elevates the whole “hope in the midst of despair” story.

The second good thing about this film is Morgan Freeman. Despite being a supporting character, and a not very developed one in my opinion, he manages give Ellis Boyd “Red” Redding as much personality as he could muster. Morgan Freeman has a presence about him that I kind of wished he was the main guy. As a character Red has a lot of potential to be explored. He’s black, he’s the guy who can get you anything aka “The Smuggler”, he has been in prison the longest, roughly 40 years. But he just ended up as the sidekick slash bestie. His fears on going out into the real world after years and years of being institutionalized was such a good conflict to explore. But they just touched upon the surface of it. Which leads me to the bad news. The main characters isn’t as memorable as I hoped he would be. A case of the bridesmaid outshining the bride. Tim Robbins’ Andy Dufrense feels hollow to me. I am never told why Andy is so zen. I mean, he is sentenced to life imprisonment in the Shawshank State Penitentiary for the murder of his wife and her lover, despite his claims of innocence. But here we have him so calm, and peaceful and hopeful. Giving beer to his fellow inmates, helping the guards with their finance troubles, pushing for the expansion of the prison library. So why isn’t he a bitter, vengeful coon, or a despairing shmuck like everybody else? Yes, I am suspicious of optimistic people.

The Shawshank Redemption feels a tad frustrating to me because I not only wanted it to dig deeper into it’s characters, but to the issues it presents as well. Corruption, violence, institutionalization, rehabilitation, rape, existentialism. These are big themes, excellent ones. But the treatment is too hallmark-melodrama for my liking. I am not against movies that explore hope and friendship, and Shawshank does a pretty good job of exuding feelings of warmth. But I feel like the movie is trying to wrench the emotions out of me, instead of letting them flow au natural. And the climax? The iconic outstreched arms with upturned face in the rain scene? Didn’t feel a damn thing for it. There I said it.