Mini Reviews is a little something I came up with for when I am lazy! But you know what they say, about short things, they’re sweet. Short and sweet. Geez, I am going to stop now. Anyhu, this first batch of Mini Reviews features four films all released this 2016. You’ve got a sorority comedy, a buddy-cop comedy, a romantic weeper, and a dramatic sci-fi film. Read on and tell me what you think if you’ve seen them. 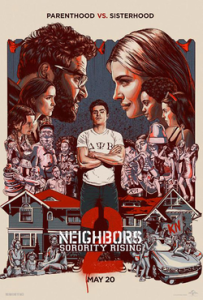 By Universal Pictures, via Wikipedia – Fair Use

Did I watch Neighbors (2014)? If I did I have zero recollection of it. Neighbors 2 will probably join its predecessor and vanish from my memory a couple of weeks down the line. But for now, I still have it stored in my noggin, and I do remember having some semblance of a good time. I think Chloe Grace Moretz is a welcome addition. And Zac Efron really got into his man-child, frat boy character. But I don’t know, the antics and gags are nothing we haven’t seen before. And by the end of the movie, you just feel so doggone tired from all the predictable back and forth. 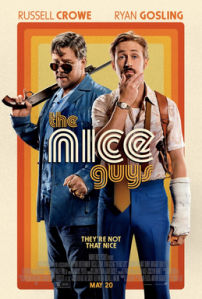 By Warner Bros. Pictures. Source: HeyGuys, via Wikipedia – Fair use

I do love a Goofy Gosling and a Crabby Crowe. And no, I am not talking about exotic fowl dishes. I am happy to see Gosling in a comedic role once more because he has such a natural talent for it. Have seen how much of a delight he is in Crazy, Stupid, Love? And has Russell Crowe been in any comedy since this one? Anyway, he makes for a solid straight man. They make a good odd pair, these two. I love the look and feel of this movie too, it’s a bit old-timey, pulpy. The plot seemed a bit knotty, and I don’t think it was able to unknot the necessary knots. But I can promise you this movie will give one hell of a good time. And the designated-driver daughter is such a funny touch.

By Warner Bros. Pictures, via Wikipedia – Fair use.

The more I encounter clumsy, pretty girl types, the more I find them less appealing. Surely there are other ways to show “accesibility” other than breaking things and falling down. But I must say Emilia Clarke is not such a pain to watch, and so is the rest of this movie. I guess the word I would use to describe Me Before You is pleasant, more or less. But more-less than more-more. Okay, I didn’t find it to be the “weeper” it advertises to be, which is fine, but I was expecting the drama to be quite proportionate to the romance aspect of it. I wanted to feel the full weight of the pain of Will’s disability, and Louisa’s heartbreak. I wanted some the feels to flow in. But alas, no such luck. I think they chose to dodge a couple of bigger issues here, for entertainment purposes I guess, which is fine because no one expects this to be a thesis on euthanasia and disability. But it’s just that the ending is a bit problematic. I know the ending is supposed to make me feel good, but I felt a bit uncomfortable, like something is a bit off. I am not going to spoil anything here. Let’s just say I am wondering whether this will leave a positive impression on people with disabilities. Also I think Emilia Clarke’s eyebrows are a national treasure.

By Warner Bros. Pictures. Via IMPAwards and Wikipedia – Fair use

What I love about a Jeff Nichol’s movie is that it is a unique movie watching experience each time. Nichol’s plops you dab smack into the heart story without any prior explanation of the narrative, and you get sucked into it right away. At least I was. While I get that the pacing might be considered slow for the hyperactive millennials used to watching turbo-charged sci-fi action sequences, but I don’t know. I propose hyperactive millennials give this a shot. I find the slow pacing actually builds the tension, and is actually responsible for that hang onto the edge of your seat feeling. And little by little Nichols hands out bits of the story, for the audience themselves to piece together. And it has some really impressive set pieces too. And while this isn’t my favorite Nichol’s movie. Take Shelter (2011) still takes that spot. I do think this does him proud. And nothing makes excellent use of the excellent Michael Shannon than a Jeff Nichol’s movie.

And how about you what have you seen lately?

5 thoughts on “Mini Reviews #1: Neighbors 2, Nice Guys, Me Before You and Midnight Special”