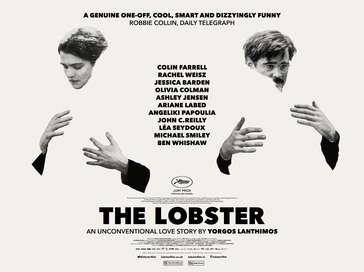 When I first heard of The Lobster and its fanciful plot, I was sold. Sounds like one of those whimsical fairytales where people get turned into a pig, or a rat, or an animal of sorts, for not following very specific rules that make absolutely no sense at all in the first place. I was ready for some deadpan humor, some enchanting visuals of people fwooping into an animal, and perhaps some witty commentary on singlehood. But The Lobster turned out to be something much darker and much more real.

The story goes like this: In a dystopian future a recently single man named David (a frumpy, sad sack Colin Farrell) finds himself shipped to a seaside hotel because the laws of the city command that single people are to be taken into said establishment where they must find a romantic partner within 45 days, lest be turned into an animal of their choosing, and then released into the woods or given to their families to be cared for. Sounds foolish right? But what’s even sillier is how they find partners once inside the hotel. All the single people who are checked in are defined by a single trait or flaw. You don’t get names in this seaside hotel, you get specific traits. Just one, to be specific. So there’s the limping man, the lisping man, the heartless woman, the nosebleed girl. From that, you must find a straight or gay (no bisexual option here), man or woman  who shares the exact same trait or flaw. Only then will you be considered coupled and escape the punishment of being turned into an animal.

The Lobster is a brilliant satire on society’s preoccupation with couplehood. It starts as a comical romp with its dry humor, and surreal world, but director Yorgos Lanthimos takes it a step further towards something that is very real and dark. Take for example the lack of bisexual option, the lack of half shoe sizes, the use of only “one” defining trait. Human society likes things in black and white. You are either straight or gay, but never both. A size 8 or a 9, but never an 8 and 1/2. And then there is the tendency for us to be very unforgiving with our “rules”. And the rule is we are all here to “go forth and multiply.” Hence, single people are anomalies that must be taken cared of.

There is the tendency of this movie to come across as cold. The structure, the artificial atmosphere, and stilted, monotone delivery of the dialogue can do that. But I think it only heightened the sense of otherwordliness of this dystopian world, but never taking away from the moments that feel so terribly of-this-earth-real. I think the cast is a brilliant one. Most especially, Colin Farrell who I never realized has the range to do a character of this sort. There is a certain helplessness to him, but at the same time a sense that he will always make a dogged effort to survive this wacko world and the quagmire he just got himself into.

And there is that ambiguous ending that will haunt you. This film with its structure

I know I have missed plenty more hidden meanings in this movie, perhaps layers of them, and I probably haven’t fully grasped the breadth and depth of its message. But I know I have experienced something special. The Lobster is why I watch movies.