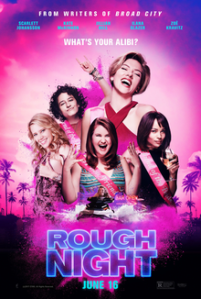 Usually I view Bachelor / Bachelorette party centered comedies with a little trepidation. Because usually what happens is that the comedy, while it starts out well enough, escalates into desperate and tasteless comedy. But I had to see Rough Night for Kate McKinnon. I can’t get enough of her. So yeah, I went and saw this one night and thankfully it wasn’t as bad

as I initially perceive it would be. The whole plot is your typical bachelorette party turned bad. Like we killed someone bad. And it was fun seeing them all scramble around and freak out and things. Some of the antics got some real laughs out of me. And besides all six girls are pretty magnetic and have such strong screen presence. Kate McKinnon gets my vote as the best performer. I mean I could listen to her talk all day. She had an Aussie accent (albeit exaggerated) on this one, and that is like icing on the cake. Next is Scarlett Johansson who I never thought about it until now but she can totally do comedy. And I kept scanning my memory for one of the girls who plays Alice, and it came to me, the girl from 22 Jumpstreet! Gillian Bell! Since she’s the lead girl’s best friend she had a lot of meaty scenes and I think she was able to pull all of them off. Even the emotionally charged ones. Illana Glazer and Zoe Kravitz rounds up the gang of six, and these two weren’t really given much to work with. But both of them are just so charming, they were able to make a little something with what little they were given. And while this isn’t as dark and edgy as Bachelorette (2012), and it isn’t as witty and heartwarming as Bridesmaids (2011) was to me, it is still a good movie to see on Friday Night, preferably with your best gals. But guys, lower your expectations okay.

Kumail Nanjiani is among the comedians whose name I would always look for as a guest in some of the podcasts I listen too. I haven’t explored his own podcast called The Indoor Kids yet, save for one episode with Pete Holmes in it (because when he, Emily V. Gordon and Pete Holmes get together it is always a riot!) but more times than not he would always make me laugh. On the big screen, I first saw him in bit role in Kings of Summer. And he nailed the “These Wontons Are Too Big” Scene. But perhaps it’s as Daneesh in Silicon Valley that people truly know him from. What I am saying is he’s a pretty talented guy and the fact that The Big Sick came out of his brain is truly not surprising. Kumail Nanjiani also unabashedly expressed his love of the romcom genre. Although he probably didn’t go about making this movie with the intention of making a romcom in his mind, he just wanted to tell his and Emily’s own, real-life story.

For classification purposes you can perhaps call The Big Sick a romcom. It follows the familiar pattern of boy meets girl, boy and girl go out and everything is coming up roses, and then boy and girl face an obstacle in their relationship which they may or may not get through. But what makes this different from your Matthew McConaughey romcom is that you don’t know what will actually happen, and the people in it feels like real people in a real relationship. The amount of jokes might be misconstrued as flippancy for the seriousness of what the couple is going through but it is not. If anything I feel like this is how comedians cope with life stuff, with humor. I don’t know any professional comedians, but I do know comedians and usually their first line of defense when sh** goes down is a joke. And in this movie my favorite one is the 9/11 bit in the cafeteria. It’s like the most inappropriate, cringe-worthy joke to make in the situation they were in, but it is just a damn good joke! You’ll know it when you see it. And I love how Kumail was able to incorporate his struggles with his very traditional Pakistani family, this is one among the many things that made this film all the more heart wrenching and heart warming.

I heard that they took a little bit of liberty when it came to Emily V. Gordon’s parents. They don’t really resemble their real life counterparts, but I think that decision did the film a solid, entertainment wise. Ray Romano and Holly Hunter as Terry and Beth Gardner were pretty hilarious, and there characters were written in a way that would really make Kuamail’s character uncomfortable and push his buttons a little bit.

Overall I love this movie, and I love that I get to watch a romcom (for classification purposes) that doesn’t make me want to claw my eyeballs out. 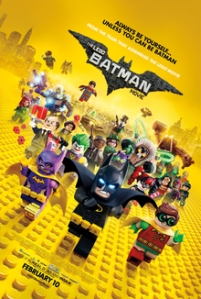 This movie definitely pales in comparison to The Lego Movie BUT, it isn’t the kind of kids movie where the adults would a.) want to blow their brains out, or b.) hibernate through the whole film. The Lego Batman Movie brings some good fun, with plenty of grown-up jokes for the adults and plenty of slapstick (butt jokes!) comedy for the younger crowd.  Story-wise it mostly revolves around Batman and his being such a lone wolf to the point that he never acknowledges being in any sort of relationship with anyone. Not even Joker his greatest arch-enemy. To Bats, Joker is just another bad guy he regularly fights, because well, he likes to fight around. And this is where the movie gets most of its meat. Joker is thoroughly offended by this lack of acknowledgement and he goes out and unleashes not only Batman’s entire, bizarre gallery of rogues (a nod to the comic books) but also enlists the help of the biggest, baddest villains in the history of TV and movies. So yeah, we get to kick around with Sauron, Voldemort, the Daleks, The Wicked Witch of the West, Gremlins, King Kong, The Flying Monkeys and a whole lot more. A lot of good fun also comes from him unwittingly adopting Dick Grayson aka Robin, beautifully voiced by Michael Cera with all the eager beaverness he could muster. And an overly perky apprentice is about the worst possible person to pair with Bats.

And as always the animation is a thing to behold. I mean the fact that Lego bricks could form a round shape is already mind-boggling enough for my tiny brain, what more to have an entire movie made of said bricks come to life right before my eyes. The movie doesn’t lack in the visual spectacle department that’s for sure, there are lots of action sequences and carnage that are worthy of both the best and worst superhero movies. The movie does peter out a bit during the last few minutes, so they slapped in a mass dance scene to satiate the crowd. It doesn’t entirely work for me, but I mean beatboxing Batman is a hoot.

One thought on “Mini Reviews #9: Rough Night, The Big Sick, and The Lego Batman Movie”